The Obama's continue to utilize pop culture to make change. By appearing on Iron Chef, First Lady Michelle Obama continues to promote her efforts of spreading the word about eating healthily and curbing childhood obesity. 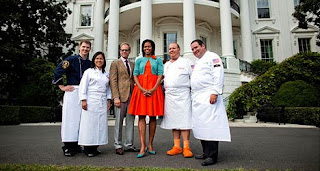 The Washington Post reports that on the first episode of Iron Chef America for 2010, the popular food cooking competition will travel to the nation's capital for a tour of The White House with executive chef Cristeta Comerford. In the Iron Chef episode, Mario Batali, Bobby Flay, and Emeril Lagasse are greeted by the First Lady Michelle Obama who informs the chefs of the secret ingredient in the White House garden used for daily Presidential meals. Aside from Michelle Obama greeting the chefs, it will be interesting to see if Batali, Flay or Lagasse can take down Comerford on his home Obama turf since the current White House executive chef has worked on site for the past fourteen years prior to the Obama administration.

Immediately following Michelle Obama on Iron Chef America is the new Food Network series, Worst Cooks in America, which features chefs Anne Burrell and Beau MacMillan as they take the worst cooks from America and teach them how to become elite chefs.

With Michelle Obama kicking off the New Year on the Food Network, budding cooks can learn Obama style White House culinary skills or check out how to cook from worst to first.