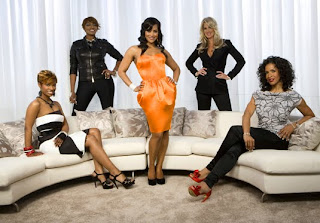 See this is where the agenda of race progress takes a back seat to capitalism. Right here is where I don't f*ck with the NAACP. The soul has been sold for ratings and advertising. For there is no reason why the buffoonery known as The Real Housewives of Atlanta should be acknowledged as "People of Color Advancing." Laughed and pointed at? Absolutely. If anything, the show is a set back for the coloreds and the NAACP instead needs to be protesting Sheree by She (yea I flipped it), Nene and her crazy eye ass, not celebratin’!

Ok, lemme cool down. It’s not these women's fault that they have exploited their lives for faux success with the exception of Kandi (we like her). The real problem is that RHOA and shows alike are called "Reality TV" when instead they should be called FARCE TV. The "Realty" title is what continues to invite raging criticism. (Oh the irony of the English language; we will redefine a word won't we? And people wonder why immigrants can't learn to speak English) However, by nominating RHOA it further endorses the VP of Bravo’s ignorant ass statement about representing what he has defined as “Black wealth" on TV. Now truth be told Black people with real money wouldn’t dare be caught wit dey bidness all out in da street. So the faux show goes on. But seriously NAACP…check yo’ self for you have truly wrecked yo’ self.