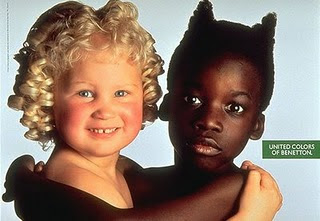 Recently my friend and I had taken on two new white friends. This was quite the accomplishment for us being that one day we realized we had none and decided we needed to expand the racial pool of our friends. We’d been spending way too much time uptown in the Black Mecca with Harlem’s finest sipping watermelon martini’s and noshing on chicken sataay discussing the next the political agenda for Black America. It wasn’t always like this…

In college our every day crew was comprised of someone Turkish, Lebanese, Portuguese, Polish, Sri Lankan, Nigerian and Nepalese. But a couple of weeks ago when my friend and I were trying to help out another friend who was looking to cast a couple of non Black females for a film project neither of us could think of anyone. How could we possibly call ourselves Urban Chameleons? So we made a goal for 2010: find non Black friends.

We had been taking this Hip-Hop Yoga class for several months, which is where we met our two new white friends. The relationship began like most gym relationships, you know with the casual after workout conversations, “I saw you doing your thing today, you were working it out!” which eventually leads to someone initiating a hang out.

A couple of Sundays ago they invited us over to another friend of theirs place who lives around the corner from Hip-Hop yoga to watch the football game. It turned out to be an amazing penthouse apartment. Elevators that open right up to the foyer, 40ft ceilings with 30ft windows, in door and out door fireplaces, a wrap around balcony with a view overlooking the city. The drinks started flowing and the friend who owned the apartment made the best hot wings we had ever tasted. They were so off the hook that my friend who doesn’t even eat chicken off the bone was going back for more, and I who usually tries to curtail my enthusiasm about chicken around white people was animated over the wings; our guards were down.

As the night progressed and the more one of the white girls drank the more tell-it-like-it-is she became. She was definitely a down white girl but the golden mistake of the night is when my friend actually told her this, “Ohmigod you are hilarious, I feel like you’re secretly a Black woman inside!”

Rule #1 for Black people: Never ever ever ever tell a white person they are like a Black person. Once white people receive this level of approval it’s as if you’ve enabled them to cross all kinds of inappropriate cultural lines.

The white girl responds, I know right! I sometimes feel like that! We should totally name the Black girl inside of me.

At this point my friend who is way too drunk to realize that she has detonated a bomb on the Black race continues by partaking in the ceremony of naming the white girl’s inner Black girl. The other white girl says how about Shaniqua ?

“Yes!” My friend responds meanwhile I have plastered the fake smile across my face. I mean what to do at this point? Begin reciting the Martin Luther King, “I have a Dream,” speech? Or was this Martin’s dream? He did say something about little Black girls and white girls being able to play together but damn.

They then ask us if we’ve seen the Youtube video about the 60 top Black names, which neither of us had. They tell us how hilarious it is and promise to send it to us to check out and they do…

After watching this video the friendship ended and we stopped attending Hip Hop Yoga. You just can’t bounce back from that kind of cultural line crossing- I mean Fried Chicken-e-Qua? Seriously? I don’t think so. However, we both learned our lesson and will hopefully have better success at this Dim Sum party we’re attending tonight. Ch'eng seems very nice.