Urban Chameleon news
Can't tell you the first thing about the Winter Olympics but this story (and picture!) caught our eye. Russians portraying the Aborigines on ice? 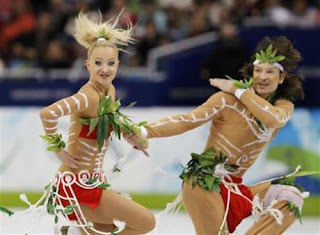 VANCOUVER (Reuters) - Russians Oksana Domnina and Maxim Shabalin added a few leaves to their infamous aboriginal themed costumes on Sunday but nothing could cover up the fact that folk dances could never be totally authentic on ice.

The world champions were accused by Australian Aboriginal elders last month of "cultural theft" in a routine where they wore dark body suits with white swirling patterns and performed ceremonial steps.

They dumped the patterns in favor of strokes of white paint, wore lighter suits, added some more eucalyptus leaves and did not paint their faces when they performed the original dance at the Olympics on Sunday after consulting experts.

"We did it more authentic and less theatrical. There are more leaves and fewer pictures," Shabalin, still sporting a red loin cloth, told reporters.

"It can't be 100 percent authentic because it's the ice and we have a lot of restriction in our costumes. I understand that they don't dance in pants ... but we are skating on the ice."

It remains to be seen how their costumes will be received by those who complained but there were plenty of other outfits on show that could get into trouble with the fashion police.

source from www.reuters.com
Below are the outfits they first wore before "toning it down." As you can see the man's outfit was darker and that apparently was REALLY inappropriate. 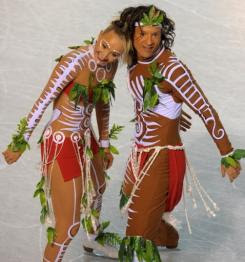 click here for: How the Urban Chameleon Came to be
Posted by Tickles.Tv at 8:24 AM