Is the recession a reason or an excuse to hit the stripper pole?

By Tammy Joyner and Megan Matteucci 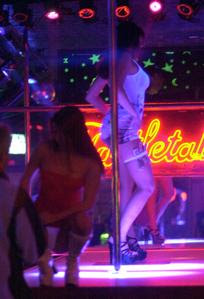 She’s stunning, even in sweats. But Leilani Burkhead’s got her work cut out for her. It’s 9 p.m. on a weeknight, time to hit the stage at Atlanta’s Magic City strip club.

She slips out of her sweats and half-jokingly mumbles something about getting geared up to work the room.

It’s an about-face from a few years ago when money rained down on dancers at this and other Atlanta adult-entertainment clubs like free-flowing Dom Perignon. Like the rest of the economy, adult dance clubs feel the pinch. The sluggish economy and closer police scrutiny have put about a dozen out of business in the past decade. And the regular patrons aren’t so regular anymore.

But that hasn’t slowed the would-be dancers lining up to apply for the $350 permit to work in the city’s 19 clubs, Atlanta police say. Among the usual aspiring actresses and dancers, there are more college students, single mothers trailing toddlers, health and office professionals and even a few age-defying grandmothers — all looking for well-paid work in a city with unemployment above 10 percent.

“We have them coming in daily looking for work,” says Michael “Lil Magic” Barney Jr., the 28-year-old general manager of Magic City, a downtown Atlanta fixture founded by his father.

While there are no hard numbers, Atlanta police say they’ve seen a spike in applications for adult-entertainment permits in the past year or so due to the recession and the recent change in Georgia law that allows nude dancers to be as young as 18.

“We’re seeing younger applicants,” said Detective Kamau Chinyelu, an investigator with the Atlanta Police license and permit unit. “We’re seeing quite a few that have lost their jobs and are now making career changes.”

hose who do wind up working in the business soon learn that even nude dancers have to work harder these days, as patrons spend less and don’t return as often. The cyber-savvy dancers have turned to social media to hold customers’ interest.

And for good reason. Even in this tough economy, a dancer can clear about $50,000 a year, and that beats working in a dentist’s office or selling homes right now.

Like it or not, sex sells in Atlanta, where there are still more exotic and nude dance clubs in and around the city than anywhere else in the country, according to the Association of Club Executives, an industry trade group. Club work can be a strong draw in an economy that has shed 8 million jobs nationwide and propelled more women into the role of chief breadwinner.

“Women who may not have ever thought about working in the industry are rethinking” the idea, said Angelina Spencer, manager of the Washington, D.C.-based trade group. “Unfortunately, mortgages, car payments and groceries don’t go away in a bad economy.”