This past summer, Urban Chameleon Media had its first live event in Atlanta by adapting and featuring some of the HOTUC stories contributed by our community! Guest readers included:

JELANI COBB, History Professor and Author of “The Substance of Hope: Barack Obama & The Paradox of Progress”

Performing: "My Cousin's Opinion on Health Care" & "The Misperceptions About Africa: It's a Continent Not a Country" 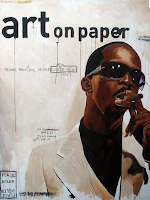 Performing: "The First and Last Black Man at the Country Club" & "What Do You Mean Jorge Doesn't Speak Spanish" (originally titled: When Another Spanish Person Tries to Play You"

Thanks to our evolving Urban Chameleon community we are able to continue to spread the multifaceted experiences that challenge stereotypes and provide an in yo’ face perspective on real issues that affect us.

Have your Urban Chameleon stories featured by e-mailing stories to tickles.tv@gmail.com