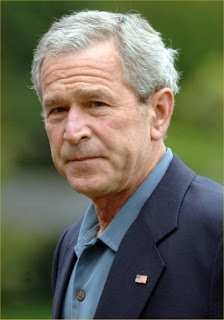 I can't help but to get some small joy out of knowing that Kanye West is still on George Bush’s mind. In an interview with the former president, Matt Lauer asks Bush if he remembered the comment Kanye made about him, he answered, "Yes, I do. He called me a racist.” He later goes on to say, "My record was strong I felt when it came to race relations and giving people a chance. And--it was a disgusting moment.”

What Kanye West actually said was that Bush didn’t care about Black people. A friend and I argued whether it was appropriate for Kanye to make the comment. My friend argued that it was very wrong, especially after witnessing how Kanye has obviously made making un-staged outbursts a habit. However, if we isolate Kanye’s actions, the Bush comment was warranted even if just for the reason of causing people to analyze the comment. It was a raw sentiment that was very real in Black communities during the aftermath of Hurricane Katrina. Maybe a more accurate comment would have been that Bush doesn’t care about poor people (who happen to be Black). The real question is: does the actual handling of Hurricane Katrina have the same emotional effect on George Bush as Kanye West’s comment?