by today's Urban Chameleon contributor Thembi Ford
Did Tyler Perry, the man I consider “the King of Coonery,” completely destroy the play that so many black girls carried dog-eared copies of in our high school and college backpacks?

Not really, and there isn’t a drop of coonery in For Colored Girls. What Tyler Perry did do in writing and directing his own version of Ntozake Shange’s 1975 classic For Colored Girls Who Have Considered Suicide When The Rainbow Is Enuf is best described as a gentle butchering: he leaves the skeleton intact but replaces the heart of the original with a heavy dose of “no good black man” melodrama and some film-making gymnastics.

Shange’s original choreopoem features an intentionally stripped down aesthetic and a cast of seven women each represented by a different color. Through poetry and dance, the classic play voices the challenges and joys of black womanhood by addressing issues such as race, rape, abortion, falling in love, and learning to accept yourself, brown skin and all. Perry’s interpretation replaces the anonymous women with a cast of characters whose experiences are occasionally expressed through Shange’s poetry but are primarily presented via a heavy-handed storyline that makes For Colored Girls more of a two-hour long soap opera than a work of art. Most of the events come straight from Shange’s work, but Perry updates the story with a male supporting cast, some moralizing about HIV and religion, and of course, a brother on “the down-low.” Yes, fans of the original, you officially have permission to roll your eyes. 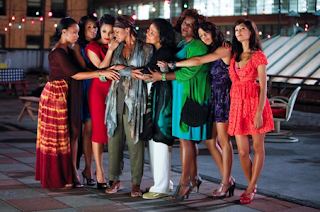 The film begins with one of my favorite poems, “sing a black girl’s song/bring her out/to know yourself/to know you/but sing her rhythms/carin/struggle/hard times/sing her song of life…” Before long I realized which notes this film erases from our song: the blissful ones. There is no Toussaint. There is no hopscotch. The joys of a first sexual experience as told by Shange’s poem “graduation nite,” are reduced to a first act aside. Perry’s version of a black girl song is more funeral march than praise dance. Instead of a well-rounded and inclusive interpretation of Shange’s work, Perry deftly manages to suck out most of the joy and hope that made the original so vibrant and true. His is a hat trick that almost impresses as much as it insults.

As expected, Shange’s eloquent poems about love, loss, and self-reliance are the best part of For Colored Girls, but their integration into the storyline is jarring and even silly at times. Imagine your standard musical but insert poetry instead of songs and there you have Perry’s solution for turning the choreopoem into a dramatic film. Theater adapted to film is always a tall order, but it’s hard to take a monologue seriously when an actress abruptly adjusts her countenance and, with a quivering lip, delivers a monologue in out-of-place language over a dramatic instrumental that ramps up for the poem’s duration and then abruptly disappears to make way for everyday scripted dialogue. A handful of these are well done, but it’s too easy to groan when a character suddenly catches the “Shange Holy Ghost.” This patchwork approach does a disservice to Shange’s words, which are still magical and remarkably descriptive today, even at over thirty years old. Perhaps, with some adjustment, Perry has created a new art form, but probably not.

Fortunately, the cast makes For Colored Girls watchable even when the film-making is bumpy. Kimberly Elise, Phylicia Rashad, and Anika Noni Rose all put forth excellent performances and every single woman in the cast acts her behind off – even problematically so in the case of Janet Jackson, who caricaturizes the cold career-woman in a way that made me wonder what ever did happen to Penny after she got over her mother’s abuse and moved out of the projects. In spite of the gratuitous tear-jerking story line (promotional tissue packets were even handed out at the screening I attended), For Colored Girls is easily the best Tyler Perry film I’ve watched, with strong attention to visuals and some powerful scenes. But how did a play about black female identity and empowerment turn into a movie about how hard it is to rise above all of the nonsense that men put us through? 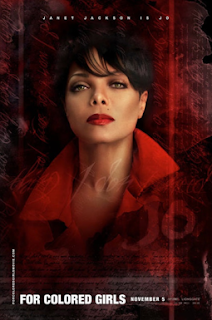 For Colored Girls leaves black women battered and communing with God and each other exclusively after we’ve travelled the rough road that some scoundrel brother has laid out for us. Meanwhile, the original passages illustrating the beautiful bits of black-girl-ness are omitted, humorized, or broken apart and scattered into barely recognizable pieces throughout the film. Of those included, the final poem “laying on of hands,” is too little, too late, and too cinematically similar to the final scenes of Waiting To Exhale to work well in For Colored Girls.

Not only does Perry’s tendency to deal in miserable stereotypes take charge in the adaptation, the women of For Colored Girls are an even worse lot, each of them victims of their own poor decision-making in the pursuit of male love. His reputation for black male bashing through stereotypes will likely take the blame for the cavalcade of one-dimensional no-good Negroes in the film – abuser, rapist, cheater, liar, murderer – but most of these characters also existed in the original without ever appearing on-stage. The difference between the two is that Shange’s women were propped up by joy, while Perry’s are driven by their need to escape sorrow.

Perry largely glosses over the persistent issues of race, sisterhood, and how plain old happy we are to be Colored Girls in the first place. That happiness, not the evil that men do, is what made For Colored Girls Who Have Considered Suicide When The Rainbow Is Enuf a groundbreaking collection of poetry and the voice of black female identity for generations of women. In that sense, the film accomplishes the very opposite of what admirers of the original work find so powerful. Thanks to Perry’s interpretation, we are again being told – this time in a twisted version of our own words – what defines us.

To read more from Thembi visit What Would Thembi Do?