An Off-Duty Cop Shoots a Gunman While Getting Her Hair Done in Brooklyn! 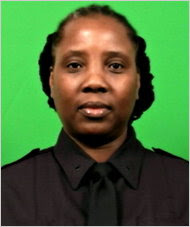 The New York Times recently covered the story of an off-duty police officer who was getting her done when a gunman entered looking to rob the salon. After the gunman ordered the four ladies present into the bathroom, officer Ferris Jones took control of the situation. She came out of the bathroom with her gun drawn and identified herself as a police officer, the gunman still opened fire. Officer Ferris Jones fired back, which resulted in a gunshot wound to the gunman’s hand. After breaking through the front door, the gunman exited. Police later found him at a local hotel after following a trail of blood from his wound.

The article rightfully commends Officer Ferris Jones for her act of duty, but we here at HOTUC would like to acknowledge the officer for her Urban Chameleon duty.

This woman went from beauty shop to Robo cop in an instant. Although the article doesn’t quite explain why officer Ferris Jones didn’t go after the gunman, I think it’s safe to assume she needed to finish with her hair appointment; she was off duty. Bravo, Officer Ferris Jones! And might I add…the hair looks fabulous! You’re our Urban Chameleon pick of the day.