The Inner Racist vs. The Business of Educating Our Children 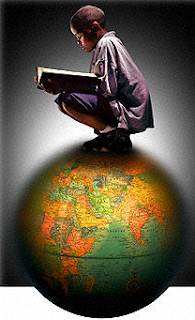 I am a Jewish woman who works at a high successful charter school in Newark, NJ teaching predominately Black children.

I came to this educational organization not to be the "Great white hope" but because I truly know that if one of us is not free than we are all enslaved.

In my years working at this school, I have been brought to me knees in awe of the children and their capacity to grow and change in the face of tremendous adversity. Many of our children have incarcerated relatives, are exposed to drug activity and gang violence on a daily basis as well as countless other mountains of opposition. Still they come to school everyday because they believe in education and the power it has to change lives. Just about a week ago we got word that we were awarded the prestigious Blue Ribbon in education. President Barack Obama and Secretary of Education Arnie Duncan give this award to high achieving schools that are sending children to college. Only 300 schools were given this prestigious award and of those schools, 80 were given the dubious honor of being named high achieving (the best of the best) and we were in that select field.

It is a tremendous honor. Education is not a sexy field; they don’t make TV shows about the truth of education. Instead they make poorly acted movies where a privileged white woman goes into predominantly Black neighborhood wearing pearls wanting to make a difference and over night change comes about. This is not the temperature of education in our county. Getting this award really meant something to my school and it really meant something to me Our community is here at 6:45 in the morning and stay through 5:00, 6:00, 7:00 at night all to be the best at serving our children. It was nice to get recognition for our hard work and for our children to be regarded as beacons of excellence.

I excitedly shared the news with my family who were very proud of the accomplishment and the recognition. My sister came over one night for dinner and I told her the good news. She responded, “Well, because it’s a Black school.” She immediately went red in the face, half-heartedly tried to back pedal and explain at the same time really feeling that way.

Her ignorance was jarring since for the past few years I have been working in a cocoon surrounded by like minded people as me who believed in creating a school where under privileged children succeed...and yes the reality is that many of these children are Black. However, the honor my school received wasn't given out of affirmative action as her comment suggested. It was in response to a crisis we face in this country around education.

Corey Booker, the mayor of Newark stated, “One cannot have a superior democracy with an inferior education system”. The rights of our children to be educated is a human right that we are denying them if we continue to provide them with sub-par schooling. The state of education in this country is in dire need of social reform…and not just for Black children but also for ALL children. We will never reach our full potential as a people if we continue to ignore our inadequate system of educating our children. If one of us succeeds we all succeed. 52% of our countries' children did not graduate from High School last year. In Newark alone, less than 2 % of all children graduate from high school.

My sister has since apologized stating that it was just her “inner racist” coming out. However, it's this kind of fundamental thinking that also needs to be educated.

Suffice it to say, we still have a ways to go.