by today' Urban Chameleon contributor HaJ
Most of us have at least one Black friend who is vegan. 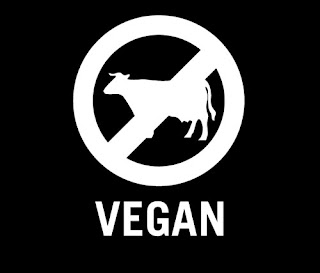 These days, Black people are so progressive even some meat lovers opt for the vegetarian special being more conscious of hormones and chemicals used in animal products. Buzzwords like, “I’m cleansing” have become more frequent in social gatherings. However, I will say my parents were on the organic vegetarian train way before the food industry discovered ways to make hot dogs and hamburgers from lentils. They, in fact, used to have our organic fruits and vegetables delivered from a health food store in Park Slope Brooklyn to where we lived in Bedstuy “Do or Die”. Shout out to Brevoort projects.
But it's been years since tofu and seitan showed up to a party on my plate. In 7th grade I transferred from an all white private school to a majority Black public school. So as you can imagine the surplus of chicken eating that I witnessed sky rocketed. It was at that time that I tasted my first piece of chicken. It was fried and delicious and came with French fries. It was so good I didn’t know what to do with myself. Suddenly, my world made sense as new taste buds that I didn’t even know I had, awakened. I then began to taste all kinds of chicken, BBQ chicken, curry chicken, lemon chicken, honey BBQ chicken, Bombay chicken, Jerk chicken, coconut chicken, chicken parmesan, chicken tenders, chicken rice, chicken salad, chicken nuggets, chicken wings. I realized that chicken makes up at least 95% percent of our lives. So if you're not eating chicken…WHO ARE YOU?

Since then I have not turned back. Today I eat chicken, steak, lamb, goat and I’m an hour a way from trying pork. Maybe not, unless you’re Latino that memo that all Black people in the north (and or influenced by Muslims) got about pork being the devil’s meat is still looming over me. The point is I now love meat so much that I look at vegans and feel no connection.

The other day a friend of mine who turned vegan about 5 years ago had a birthday party. She hangs out in some serious vegan circles. A couple of us meat lovers attended a prior party right after work absolutely famished, looking to shoot a bow and arrow into the first thing on four legs we saw move. It was to our surprise that there was not a single meat dish in sight. And vegans love to try and fool meat lovers by recreating traditional dishes like pot roast, arroz con pollo, and cheeseburgers with soy products to see if we can taste the difference. WE CAN! One brotha at the party, who was clearly still hungry from the lack of protein, drew the line when Rice Cream was served for dessert. He put on his coat, walked down to the nearest Bodega and returned with some Haagan Daze ice cream made from the cow.

Needless to say, at the birthday party those of us who eat meat knew to EYOMB (Eat Your Own Meat Before). However, we were wowed by how even more vegan this party was. For instance, there was this one brotha that was so vegan that he brought his own kale to the party even though my friend already had kale. I had to ask, “What’ wrong with your kale that he had to bring his own?” She responded, “My kale is slightly steamed and he only does raw.” Another brotha I was talking to revealed to me that his shoes were even vegan. I was not ready.

Now because I love food I will always check out the buffet table at any event regardless of the expectations; besides there were some yummy delights and my girl can cook. However, there were a number of dishes that a few of us party members gathered around tried to identify. Since different people brought different dishes and none of those people seem to be around, no one was able to identify what all the dishes were, including the birthday girl; except for the kale she made. There was one dish however, that actually looked like chicken. The first thing I thought was let me find out that tofu is making chicken wings now, as I would not expect actual chicken wings to be at this party. For 5 min we all stood around trying to figure out what it was. We smelled it, stirred it and poked it. Meat lovers didn’t want to taste it and run the risk of it not being meat and vegans didn’t want to taste it and run the risk of it being meat. I decided to channel my vegan days and break this mystery for everyone. To my surprise...it was actually chicken wings. The other meat lovers dug in. I asked my friend, the birthday girl, who would dare bring an animal into this holy vegan house? She replied, “Probably my mother.”

Seconds later my friend’s mother comes around the corner. Happy to see her, I greet her and say, “Mrs. Hopkinson, I heard you brought the chicken!” She replied, “Oh yeah, you can’t have no party without chicken.” Later in the evening, when it was time to sing happy birthday, a vegan cake was brought out to accompany the tune. The cake was actually quite delicious, but that did not matter to Ms. Hopkinson who immediately came around to everyone’s plate, regardless of vegan status, to a la mode your piece of cake with some real ice cream.
click here for: How the Urban Chameleon came to be
Have your Urban Chameleon story featured by e-mailing tickles.tv@gmail.com
Posted by Tickles.Tv at 4:49 PM