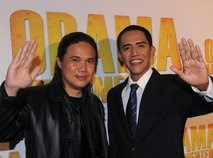 JAKARTA (AFP) – A film about US President Barack Obama'schildhood days in Indonesia made its debut in Jakarta on Wednesday, promising a very different perspective on the man in the White House.

"Obama Anak Menteng" or "Obama the Menteng Kid", is set in the upscale Jakarta neighbourhood of Menteng, where Obama lived from 1967 to 1971 with his mother and Indonesian stepfather.

Co-director Damien Dematra said it showed the US president in a light that Americans might find strange.

Even so, producers skirted controversy surrounding the extent that Islam influenced Obama's early years in the world's most populous Muslim-majority country.

A scene showing Obama, who is a Christian, praying like a Muslim was dropped as it was deemed "too political", Read full article on yahoo.com