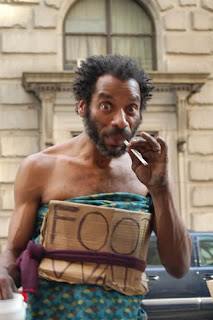 Growing up in the early 80ties I used to question why my intellectual, progressive, degree earning, world traveled parents decided to raise me in a crack head infested, gun shot bucking, drug dealer having neighborhood also known as da ‘hood. Every day, on my way to private school located on the other side of town, I stepped over different color crack vials, prayed for my life, and dreamed of one day living in a high-rise doorman building surrounded by white folks; ‘cause they couldn’t possibly be experiencing these same kind of problems. My white friends at school looked relaxed and at peace, in fact the most frazzled I had ever seen one of my school mates was over this really complicated long division math problem that had the class stumped. Meanwhile, I was calculating my route home to avoid Bebe’s Kids that at one point in time were filling up water balloons with their urine and targeting folks.

My parents brushed aside my worries, told me that the 'hood shapes character and that I needed a little culture. For them there was nothing like living with the people. I will say this, the one time Bebe’s kids did try to mess with me, my intellectual, progressive, world traveled father chased them down with a machete. He was from Jamaica.

It wasn’t until years later, when I had to start paying bills, robbing Peter to pay Paul and looking for someway out of the rat race, that I discovered the value of good Real Estate. During the early eighties, my parents had the foresight to purchase property in our crack head infested, gun shot bucking, drug dealer having neighborhood also known as da ‘hood; where houses at the time only cost seventeen thousand dollars. Their mortgage payment was a whopping $217.00 per month. The irony is in all that time I was looking to run to the white neighborhood, white folks ended up moving into our neighborhood! This resulted in driving up the Real Estate so much so that when my parents were ready to sell they made an 800% profit!!!

My father passed shortly after the sale of the house and my mother decided to take her newfound wealth down south to Hot-Lanta; where she purchased a 2400sq ft, three-story loft, balcony off the bedroom and living room with a view of the downtown skyline. And where is this piece of oasis located you ask? Another crack head infested, gun shot bucking, drug dealer having neighborhood also known as da ‘hood. At this stage of the game I expect nothing less from my mother. She would never move to the suburbs. She claims she knows how to handle a crack head better than deer.