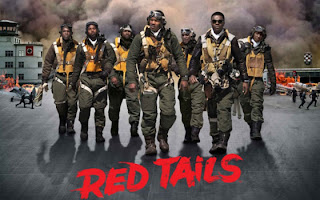 I am so sick and tired of going to see a Black film out of charity. Every time a Black film is released the word “support” is not far behind, and George Lucas’s latest project featuring an all Black cast, Red Tails is no exception. Black people everywhere were dumb founded that Mr. Star Wars himself could not get Hollywood on board to make his $(93) ninety-three million dollar film; a story about the Tuskegee Airmen. Thus the campaign tagline for Red Tails was solidified, “Support This Black Film!”


The media roll out plan was perfect; as the exposed plight of Lucas’ fired people up to get their “activism” on by posting articles, Facebook Status Updates and Tweets reiterating the importance of “supporting” this Black film. The results lead to a successful $(20) twenty-million dollar opening weekend. It almost felt like there was more patriotism displayed for Lucas than there was for Troy Davis. Regardless, we did it! We showed Hollywood, and therefore can expect more films about the Black experience coming soon to a theater near you. Right? Wrong!


Do you know how many Black films have done “surprisingly” well over the last twenty years at less than a fraction of the cost of Red Tails? Are we not still having the same damn conversations about Hollywood not making Black films? Let alone ones that are diverse? (See article: All We Do is Eat, Fight, F*ck, Dance and Pray.) Is Hollywood all of a sudden going to start churning out $(100) one-hundred million dollar Black pictures?


Spike Lee can’t even get 40 acres and a mule. Hate to burst the bubble, but Hollywood is predominately ran by white men who don’t understand Black people; even though they swear they do. In pitch meetings, Hollywood executives are quick to state why a Black film won’t do well (welcome to the pity party Lucas) and include statistics about the ones that have failed. Even though these statistics are smaller than a pubic hair compared to the number of white films that fail year after year. The reality is, “Black” cannot possibly represent a universal experience and Hollywood won’t invest. Instead of continuing to knock on the same door that doesn't want to let you in, build a new house. With all the technology at our finger tips why not start investing in new distribution models and tell Hollywood to kiss your Black ass!


So why did I end up seeing Red Tails if it wasn’t to send a message to Hollywood? One word, GUILT.  All the Facebook updates had me feeling like I was a sell out, Anti-Black, if I didn’t see it opening weekend and support an important story about Black History. There was just one problem...Red Tails has no story, at least not the one that their PR team is pimping. I walked away with no real understanding of who the Tuskegee Airmen were and what made them exceptional. It’s not enough to show scenes where a white man either calls or treats the Black man like a nigger to validate storytelling. In fact, there was more of an emphasis on the Tuskegee Airmen blowing up the enemy than there was on a fight for equality.


At the end of the day, I knew from the moment I first saw the trailer that this wasn’t a film I wanted to see. Regardless if you agree or not, shouldn't I have that freedom of choice?